The Bharti Airtel stock has lost nine per cent since the start of November on concerns of dollar-denominated debt and slow growth in Africa business. The only exception to the downtrend came last week (the stock was up two per cent on November 19) on news Bharti was looking at selling the tower business in Africa for $1.8 billion.

While the Africa business has seen continuous decline in revenue growth and negative free cash flows, analysts at Sharekhan say concerns are overdone and operations are likely to stabilise and grow, though at a slower pace against the double-digit growth envisaged earlier.

The second issue is the consolidated net debt of $9.5 billion, given the rupee depreciation. While financing costs will go up, Deutsche Bank analysts Srinivas Rao and Amyn Pirani say the increase in interest cost of $47 million is immaterial and the mark-to-market impact on the principal, $950 million, while high, is not significant enough to alter their investment view. The key monitorables are the spectrum auctions in January and the threat of new competition from  Reliance Jio Infocomm, when it launches services. However, the reserve price levels for various bands, while higher than Telecom Regulatory Authority of India (Trai) suggestions, are lower than March’s.

While Africa business is expected to stabilise and higher margins for the India business could come through as the company cuts discounted/free minutes, most analysts have a buy, with an average target of Rs 400 (an upside of 18 per cent from Rs 337).

Tower sale positive
Airtel is reportedly in talks (the company says it will not comment on market speculation) to sell its Africa tower infrastructure of 15,000 towers for an estimated $1.8 billion, $120,000 a tower, lower than the historical average of $128,000. Goldman Sachs analysts say with African markets having four-five telecom operators, the room for incremental tenancy is low. With other telecom companies planning to sell assets, an increased supply is dampening valuations. 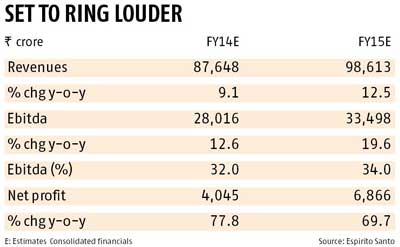 The sale would result in a value unlock of Rs 12-18 a share (Kotak analysts) and will help reduce debt. Some others, though, expect gains to be Rs 7-8. Naveen Kulkarni and Vivekanand Subbaraman of PhilipCapital India Research say, “The lowering of the dollar-denominated debt will translate to lower earnings volatility and possible re-rating of domestic business, trading at seven times FY14 enterprise value/earnings before interest, taxes, depreciation, and amortisation (Ebitda) compared to Idea Cellular’s 7.8 times. The deal will add five-six per cent to estimated earnings for FY15.”

Africa biz to stabilise, India’s to grow
The situation in Africa business has been a reason why the Street has been giving lower valuations to Bharti as compared to peers like Idea. Revenue growth has been coming down continuously over the eight-nine quarters in the business from a high of 23 per cent in Q2FY12 to two per cent in the September 2013 quarter, with Ebitda margins of 25-28 per cent. Capex is coming down, bringing down the negative free cash flow. The African operations are now close to turning free cash flow positive, say Deutsche Bank analysts. While operators dropped rates to grab market share in some countries in FY12 and FY13, those are expected to stabilise, with regulators prescribing a base. Espirito Santo analysts estimate margins for the Africa business (26.9 per cent in September quarter) to rise to 28.9 per cent at FY15-end. The margin gains are expected on an increase in revenue a minute, cost cuts and higher capacity use. On the India business, given Bharti's voice revenue per minute (RPM) at 36.7 paise is two per cent lower than Idea's 37.5 paise, there is room for improvement. With Bharti aggressively cutting on promotional rates and free minutes, analysts say RPM is likely to improve.
Posted by Business Daily Africa at 4:05 AM